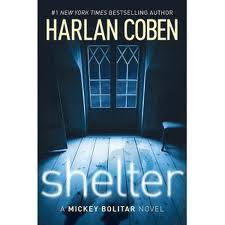 Here we go--Shelter by Harlan Coben.   I was very grumpy when I picked this up and began to read it.  I'm a huge fan of Harlan Coben's thrillers, especially the Myron Bolitar ones.  But  Shelter is TEEN fiction.

So of course, I had to read it.  Isn't this what my New Year's Resolution is all about: identifying those moments of middle aged inertia and confronting them?  Spotting my resistance to trying something new, and then combating it?

I should also admit to a vested interest here.  If my current novel ever finds a publisher, this is exactly what I will be requiring my readers to do.  I know there is a loyal band of hard core fans out there who loved my novels.  They will be scowling.  What is she playing at?  We don't want TEEN fiction.  We want more about those characters from Angels and Men. We've been waiting for 11 years!

But back to Harlan Coben's new teen novel, Shelter.  Well, I hoovered it up.  Myron appears as the hero's uncle.  Uncle?  But I thought Myron was an only child.  Where has this brother of his suddenly appeared from?  A bit of hasty back-plotting by the author here, I thought cynically.  I've since discovered that there is a whole other adult novel, Live Wire, which fills in this particular gap, and makes the whole Shelter concept plausible.  Or more plausible.  I expect.  I haven't read it yet.

This just goes to show that even the master-plotters of the genre can occasionally paint themselves into a corner which requires some ingenuity to get out of.  How does Coben go about planning his books?  Maybe I could pick up some tips.  I checked out his website under FAQ.  It was nice to see the old favourites: Where do you get your ideas from?  Are your characters based on people you know?  And there was the frequently-asked plotting question.  His answer: 'I don’t outline. I usually know the ending before I start. I know very little about what happens in between. It’s like driving from New Jersey to California. I may go Route 80, I may go via the Straits of Magellan or stopover in Tokyo… but I’ll end up in California.'