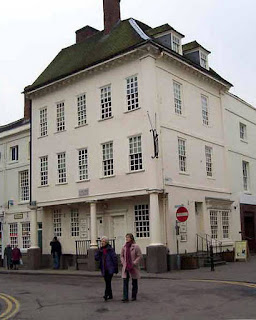 To be honest, this was all I ever dreamed that co-founding something would be.  Basically, I sat in a room with some very clever motivated people and said, 'Oh, wouldn't it be great if we could set up something for Lichfield teenagers, to encourage them to write?'  I tossed out a few suggestions, and these wonderful people went ahead and organised it.
I remind myself every so often that there really are folk out there who enjoy organising things, just as there are people who like columns of figures and having conversations with HMRC.  Accountants, we call them.  To me they are like extreme sport enthusiasts.  I don't begin to understand what makes them tick, but hats off to them.
The culmination of their organisational efforts was a week-end of creative writing for a dozen AS and A-level students.  We were hosted by the wonderful Samuel Johnson Birthplace Museum, http://www.samueljohnsonbirthplace.org.uk/ and were lucky enough to hold our workshops in the very room where Johnson was born (here in the picture--visit them, you'll love it).  A statue of the great man was visible through the window in Lichfield's market place.  How could we not be inspired?  A poet could not but be witty in such a jocund company! (as Johnson never wrote).  On the Saturday it was fiction (led by me); on the Sunday it was poetry, taught by poet Neil Rollinson. http://www.neilrollinson.com/
Having taught with Neil before, I know that teenagers are inclined to think that poetry is a lot cooler than prose.  Which secretly means they think Neil Rollinson is cooler than Catherine Fox.  So I bought the students jelly babies, to make them like me more.
The tutors certainly had a good time, and I think the Johnson Scholars (as we've decided to call them) enjoyed the week end too.  Some very promising work was produced, and we're hoping to continue building on this beginning.  Check out the website to find out the official side of this new venture:
http://www.lichfieldfestival.org/blog/2011/09/the-samuel-johnson-young-writers-scheme/
Posted by Catherine Fox at 13:22