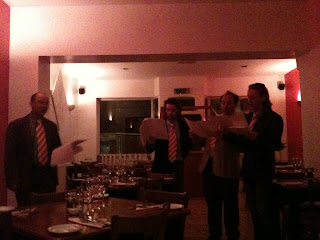 Last Monday was the chancellor's 50th birthday.  He made me promise not to arrange a big surprise party for him.  I think the idea of coming back from Choral Evensong to discover 200 people hiding under his study table was just too much.  This was a pity, in a way, as the new Head of the Cathedral School had kindly offered to lend me 450 pupils, all of  whom would have been wildly excited at the prospect of surprising Canon Pete.  But the thing to bear in mind is that I have a significant birthday of my own looming and I don't want to turn the whole thing into a nightmare of escalating reprisals.

But it seemed a shame for the day to pass with no surprises at all.  Hence my new thing of the week--hiring a Barbershop Quartet.  This is something I've always wanted to do.  And here they are in the picture, performing in The Olive Tree, Lichfield.  You will notice that the restaurant is empty.  This is because it was fairly early on a Monday night and no other diners had arrived by then.  It is not because they all ran out with hands clamped to ears when the group launched into 'Happy Birthday!'.  The other thing I should point out is that they are wearing very expensive silk ties bought in Venice, not ties from the Friary School, Lichfield.  The quartet was made up of two cathedral lay clerks, one concert violinist and half the cathedral Director of Music (the husband half of the husband-and-wife team, rather than the victim of a tragic accident with a bacon slicer).

Was it worth it?  Yes, yes, yes.  Perfect.  Thank you, chaps.  The chancellor bore it extremely well.  After pitching the right key with an iPhone (that's how modern they are) they sang 'Will you still love me tomorrow?' and 'Goodnight sweetheart'.  Then off they went for a pizza.  We did think about hunting them down and bursting in on their meal and caterwauling the Lamb Evensong responses, but thought better of it.  The restaurant staff were very relaxed about the whole thing.  Possibly they were relieved it wasn't a choral Full Monty act.

If you'd like to hire these lovely talented gentleman yourself, get in touch with their leader via http://www.sarumvoices.co.uk/
Posted by Catherine Fox at 12:27