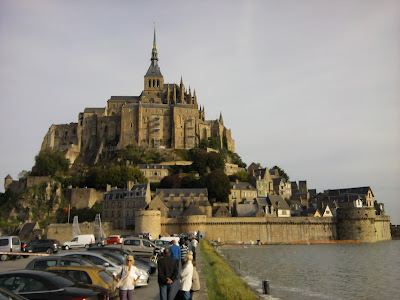 Well, I assume you all recognise this famous landmark.  Le Mont St Michel, France.  If you are planning on visiting during the tourist season, get there nice and early to avoid the queues.  This year we were in France when the holiday season was almost over, and the narrow streets winding their way up the mount were not quite as packed with tourists.  The coffee was as expensive as ever, mind you.

We've been holidaying in Brittany for the past six years.  I dare say we'll look back on this period as the Brittany Years.  There was an elegiac feel in the air this time; partly because it was starting to feel autumnal, but also because this was probably our last family holiday, just the four of us together.   I'm amazed we've sustained it this long, really.  Many teenagers opt out of holidays with mum and dad after the age of 14, preferring instead to stay at home and trash the house with illicit parties that spiral out of control. 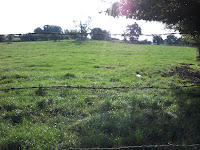 Now then, the new things.  Obviously going to France is not a new thing.  But as promised in an earlier posting, I did smoke my first cigar.  My first tin of cigars, in fact.  A new vice.  Comparable, I think, to drinking a tiny intense espresso in an Italian piazza whilst wearing Ferragamo pumps.  I have a pair of Ferragamo pumps, as it happens.  Got them in a Charity Shop in Shirley.  I'm glad I only spent £12 on them, to be honest, not £250, as they aren't very comfortable.  I'm determined not to be beaten, but so far it's 3-2 to the pumps.  The picture of a cow field shows you the view I contemplated while smoking my cafe creme each evening.

My other new thing was driving in France.  Driving on the right.  Shriek.  The experience would have been even more alarming had the car been a left-hand drive.  I can imagine myself fumbling in panic in the glove compartment for the gear stick each time I approached a junction.  In fact, it wasn't too dismaying an experience as it turned out.  French roads are generally pretty empty.  On the whole, I prefer to be driven, so that I can stare blankly out of the window.  Staring blankly out of windows is part of the writer's job description, and is not easily compatible with driving.  Still, the challenge of driving on the right was there, and I rose to it.  Nervously and timidly, but there we are.  I hope I'm a better person for it.
Posted by Catherine Fox at 06:28