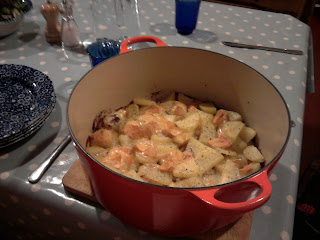 Here it is: tartiflette.  Do you know what tartiflette is?  The spell check doesn't.  It offers 'Tartuffe' and 'four-letter'.  I didn't know what it was until I got back from France and Googled it.  We'd driven past a sign advertising 'Paella, couscous, tartiflette.'  From this we inferred it was a kind of food.  Well, three out of four of us did.  My older son told us it was French for cushion.  He has never done French in his life.


Never done French!  At all!  These days there are huge swathes of the school population who don't learn French.  And there are many others who come through GCSE French unscathed by any knowledge of grammar.  Or indeed, by basic French vocabulary, judging by my younger son's French-speaking abilities.

Still, even the combined forces of two grade A O-levels from 1978 (mine and the chancellor's) weren't sufficient to crack the mystery of tartiflette.  Care to hazard a guess, based on the photo?  (No marks will be awarded for 'Dog's breakfast'.)  Here's the correct answer:

Tartiflette is a French dish from the Haute Savoie[1] region of France. It is made with potatoes, reblochon cheese, cream, andlardons.[2] It is also commonly found with onions.[3] A popular variation of this dish is to substitute the lardons with smoked salmon. The word tartiflette is likely derived from the Arpitan word for potato, tartifla.


There.  Saved you the trouble of going on Wikipedia.  I also seem to have bollocksed up the formatting.  If you can read this, as the bumper stickers say, you're too close.


Ah, sorted it out.  Back to tartiflette.  My valiant attempt at this 'palliative dish' (as one website oddly describes it) was hampered by a technical hitch.  The Close internet connection went down, so I had to reconstruct the recipe from memory.  I had the right type of cheese, mind you.  Bought it at the co-op after my visit to the mobile scanning unit.  On the strength of this, the chancellor has suggested I rename this blog 'Tits and Tartiflette'.  But I shan't.  Who knows what perverts would start following me?


The rather handsome le Creuset (continuing our French theme) casserole dish in the picture belongs to the precentor and his wife.  I ran across the Close to borrow it.  My own le Creuset pans are too small.  They are blue, though, so they are infinitely more tasteful.  Orange is such a Protestant colour.  I'm shocked the precentor has it in the house, to be honest.  Maybe I'll try and keep it.


Anyway, tartilflette: tasty, in a cheesy potato-y way.  Should have cooked it longer, but the family were getting restive.  If you only bake one cushion this year, let it be this one.
Posted by Catherine Fox at 13:59

Email ThisBlogThis!Share to TwitterShare to FacebookShare to Pinterest
Labels: tartiflette