It's gradually dawning on me that my enthusiasm for judo is not shared by those around me.  The congregation of Lichfield Cathedral, for instance--not a very martial group of people.  Realistically speaking, I'm not likely to persuade them into the dojo for an introduction to The Gentle Way (laughingly so called).

So instead, I thought I'd share one of my favourite martial arts books with you: JUDO Self-Taught in Pictures, by Hubert Klinger-Klingerstorrf (2nd Dan, Instructor of Judo at the University of Vienna).  Published in 1952, 'the object of this book is to instruct the reader in the use of Judo in self-defence.'  There isn't a whole load of dense technical prose to wade through.  Instead the would-be judo distance learner is provided with helpful diagrams illustrating how to defend himself (this is the 1950s, so it always is him) against a range of attacks.  'Breaking a stranglehold whilst on the ground', 'defence against upward knife-thrust', 'defence against a blow from a cudgel'--yes, Vienna was a hard-scrabble place in the 50s.

Here's a photo of the page illustrating 'Defence against Thugs and Hoodlums', with special reference to the garotter: 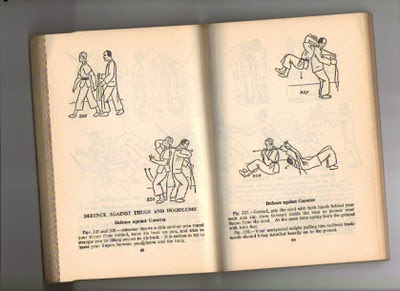 Sorry it's a bit wonky, I've only just worked out how to use my scanner.  But you should get a flavour, and I hope next time some hoodlum tries to garotte you, you'll know what to do.  Admittedly, Lichfield doesn't have much by way of a grim underbelly.  Gangs of thugs are not generally found prowling the Close, unless you count the Lay Clerks.  Perhaps, more relevant--given the age demographic round here--is the section on 'Defence against Attack with a Walking-Stick'.  Klinger-Klingerstorff cautions that this particular defence should only be employed in extreme circumstances: 'If your pull is powerful enough and takes the Attacker completely by surprise, you could break his neck by this counter.'  Fortunately, anyone attacking you with a walking-stick is unlikely to be very mobile.  This means you will probably be able to employ the most effective martial arts counter of all--running away.
Posted by Catherine Fox at 13:00