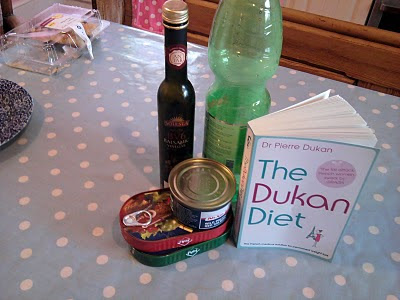 I wasn’t going to include this, as technically it falls outside the rules (I didn’t nominate it as a New Thing before starting). However, I knew you’d want to hear about it, given that you (judging by my blog stats) are the kind of people who are far more interested in seedcake and gossip than the conservation of Anglo Saxon artefacts.
So. I started the Dukan Diet last week. As you may be able to see from the book jacket, this is ‘The fat attack French women swear by.’ (NB, it is not to be confused with the strangely titled Why French Women Don’t Get Fat. They do. It’s middle class Parisians that don’t. The answer, hardly requiring a whole volume, is simple: they smoke.) If you are thinking of leaving a comment to the effect of ‘You don’t need to diet!’ then bless you, but the NHS Body Mass Index healthy weight calculator said otherwise. BMI of 25.51: ‘This result suggests you are overweight.’
Obviously BMI doesn’t take muscularity into account, and I am incredibly muscular. If I flex my deltoids grown men flinch--though possibly in horrified pity. I am also immensely clever, and have a lot of brains. Brains are very heavy. It’s been scientifically proved how heavy they are.
OVERWEIGHT?! How dare you. You are only saying that, O nitpicking petty-minded healthy weight calculator, because I have carelessly shrunk an inch. I’ve discovered to my chagrin, that I am only 5’7”, not 5’8”, which I have been confidently asserting is my height for decades. It is that lost inch which tips me over the edge into the overweight category. My clothes have all shrunk too, in solidarity. This is very sweet of them, but in no way helps. Hence Dukan.
What is the Dukan Diet? In a nutshell, low-carb, low-fat, lots of water, (see picture. NB the Morrisons pecan Danish pastries in the background are part of the Bloke diet). Other food groups are gradually reintroduced. It is one of those regimes that prompts the following conversation: ‘What? Low-fat and low-carb? Sounds terrible! I couldn’t stick to that. How much have you lost? Really? In how long? Really?! What was it called again?’
The official book has some priceless French moments: ‘If you do not like balsamic vinegar that is a pity as it is more appealing to the senses.’ You can almost hear the Gallic shrug. Chewing gum may help, Dr Dukan concedes, though ‘I do not eat gum myself as chewing is inelegant.’ As a Frenchman his suggested recipes include delicacies like Thon au trois poivrons, and Moules Marinieres. This will hardly do in the UK where we like our diets penitential and dourly Protestant. It can be easily adapted though: just eat a tin of pilchards.
Yes, yes, yes, but does it work? 7.5lb in a week.
What was it called again?
Posted by Catherine Fox at 06:01