WEEK 7—Behind the Scenes at the Museum

Below: Pectoral cross and folded cross from the Staffordshire Hoard 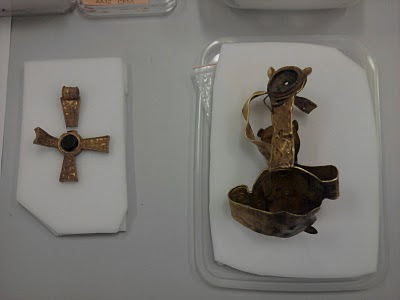 This week’s new thing was a trip to Birmingham Museum and Art Gallery’s conservation room. I tagged along with a group being shown part of the Staffordshire Hoard close up and personal. No, it’s not fair, is it? I only got to do this because I’m married to the canon chancellor of Lichfield Cathedral, who has been working with partner groups setting up the Mercian Trail, and organising the Hoard travelling exhibition this summer. It comes to the cathedral in August. (In mitigation, may I just say that I am obliged to attend a great many tedious functions because I’m married to the canon chancellor of Lichfield Cathedral. Plus this house is cold.)
We were able to get a glimpse into the working life of Deborah Cane, the Collections Care and Conservation officer. Each week she has a new favourite Hoard item, as her painstaking work reveals yet more wonders of Anglo Saxon skill. You will see in the picture her tools laid out on her bench. One of them is a little device which holds a thorn. Thorns are the best thing for gently scraping mud off gold filigree, apparently. If you get over-enthusiastic, they break before they can scratch the surface. Thorns and water, that’s the way to do it. Not Cillit Bang. A former museum director in our group nearly passed out when I said that.
The detail on these pieces of battlefield bling is mind-boggling. One theory is that the Anglo Saxon goldsmiths were all myopic. Not much good with a bow and arrow, but they could knock you up a fancy sword pommel as soon as look at you. Some items in the Hoard are still a complete mystery. There are, for example, several tiny gold snakes, some of which have pins on the back. When Deborah put the snake under the microscope we were able to see the rather mournful expression on its face (see below). Perhaps it was based on the face of a goldsmith depressed by the thought that nobody else was shortsighted enough to admire all the detail.
The chancellor was particularly pleased to see the ecclesiastical items, which include a folded up cross (possibly the ornamentation from the cover of a Gospel Book) and a pectoral cross. He nominated these as the things he’d most like to slip in his pocket. I had my eye on the tiny seahorse. Monday was probably our best chance. When the Hoard comes to the cathedral it will be behind bullet-proof glass so thick it would take 5 minutes with a pick axe even to chip a small hole. Apparently, CCTV camera footage from other museums shows crooks hurling fire extinguishers at this type of glass, then reeling back as the extinguisher bounces off and deals them a glancing blow to the head. Talking of glancing blows to the head, the security measures in the cathedral will include our fearsome trio of vergers, armed with ceremonial staffs. You don't want to mess with the vergers, trust me.
Gold, gold, gold! It was an astonishing experience. (I'll create a distraction, darling, and you snatch the cross.) All this (and a lot more) was dug up in a field a couple of miles down the road, just off the old Roman road of Watling Street. Makes you want to buy a metal detector, doesn't it?
For more about the Staffordshire Hoard, go to www.staffordshirehoard.org.uk/
For more about Lichfield Cathedral, go to www.lichfield-cathedral.org/
Close up of snake's head: 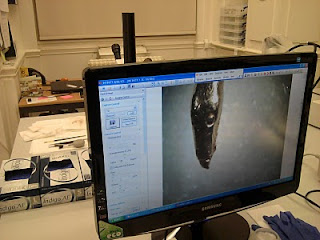 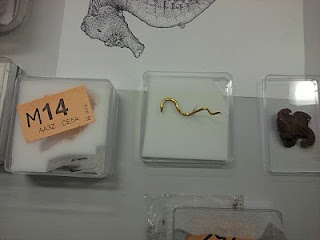 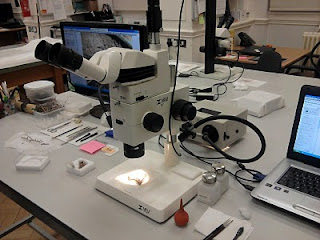