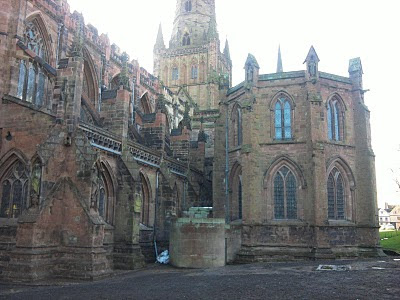 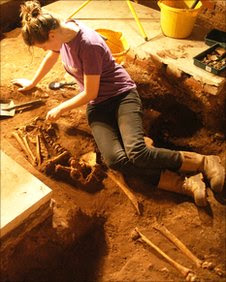 You have been patient, thank you. I can now tell you the top secret thing. In fact, it turns out I could have told you ages ago, but I was not kept up to speed on the cathedral’s press releases.
The top secret new thing I did was to visit the site of an archaeological dig taking place in the cathedral chapter house. That’s not particularly top secret, of course, unless something exciting is discovered. In this case, human remains.
‘Three ancient burials have been unearthed at Lichfield Cathedral. It follows an archaeological investigation in the Chapter House by Cathedral Archaeologist Kevin Blockley. For the last 750 years, two of the skeletons have lain just below the floor of the Chapter House, which was originally built in the 1240s. The dig was in preparation for the Staffordshire Hoard Temporary Exhibition which is due to take place later this summer.’ (For a more complete description visit the BBC Stoke and Staffordshire website.)
The sensitivity here was the whole issue of ‘human remains’ and how they are to be treated. As I looked into the sandy trench that had been dug in the chapter house floor I was struck by the thought that it was more like looking at a fossil than a human being. Curiously unshocking. Dismembered corpse discovered under cathedral floor, yes. Bones, not really. After all, you could probably stick a spade in the grass anywhere round the cathedral and hit human remains.
‘Oh, look, a skeleton.’ That was about the size of it. We had a skeleton hanging in the biology lab at school. At least, I’ve always assumed it was a real one, rather than a plastic reproduction. It’s difficult to make any kind of personal connection with a skeleton, although we've all gotone, and indeed rely on it. Maybe this is all part of the sheer impossibility of imagining ourselves dead. The brain suggests some vague image of these bones sleeping under the cathedral floor, and being disturbed by the archeologist’s trowel. Oi! put that slab back. Some of us are trying to get some kip down here.
If you work in a hospital or a funeral parlour, or if you are clergy, then death is a familiar process. Dead bodies as well as bare bones are a just a fact. Of life, I was about to put. Of death, then. That’s where we’re all heading. It’s just that in our culture recently we’ve shunted it out of the home and allowed ourselves the luxury of not quite looking squarely in it.
How old are the remains? We'd need to carbon date them to be sure. But here's an idea floated by the canon chancellor in the cathedral press release (which I was eventually shown): 'We are very excited about the prospect of exhibiting iconic items from the Staffordshire Hoard in the summer. It is an intriguing possibility that these beautiful pieces of gold and garnet Saxon jewellery will be displayed only feet above what we now know may have been a place of Saxon burial.'
Posted by Catherine Fox at 05:25