I've learnt from yesterday's mistake and remembered to take a nice eBay type picture of today's key piece before I put it on: 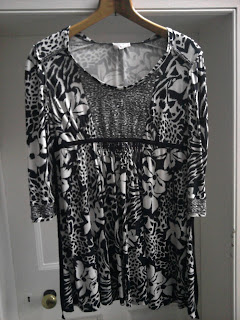 There we are, a rather lovely top from a charity shop that didn't know Ghost was a designer label and therefore didn't charge very much for it.  This is always a bit of a dilemma for someone like me, brought up with a code of scrupulous Nonconformist honesty.  If I find money on the pavement I feel I ought to take it to the police, or put it in the collection.  I point out to shop assistants that they've given me too much change.  Likewise in charity shops when I see an absolute bargain, a little voice inside me (it's my mum's voice, actually) urges me to tell them they're undercharging.  'You do realise this is genuine handmade lace, don't you?'  Happily the reply is usually, 'Ooh, is it love? It's ever so pretty, do you want it in a bag?'  I then shrug and put an extra pound or two in the donation box to shut my mother up.  My rule of thumb is that I only snap up such bargains if I actually like them.  I never buy them in order to make a killing on eBay.  That would be scurrilous.  Unless I donated a portion of the profits back to the charity I'd just ripped off, of course.  Charity Shopping ethics: a whole subject in its own right.

As you can see, this black and white top tests yesterday's 'Never Wear a Smock Unless you are a Hardy Peasant' diktat.  To be brutally honest, I doubt if I'd have given it a second glance if it hadn't been for the label.  Shameful but true.  But as it happens, I was pleasantly surprised.  It does not make me look like a pillar box.  You can probably just about see in the photo that it has a series of tiny tucks just below that empire line black ribbon.  This has a merciful flattening effect.  The ribbon also ties round the back, so the entire garment can be pulled in nice and trim, rather than 'flapping about like Fanny Craddock's pastry' as my grandma used to say.  She had no opinion of Fanny Craddock.

With this... yes, I will be brave and call it a smock, I am wearing skinny jeans.  If I go out I will put on boots, but right now I'm wearing fake Uggs just to keep warm.  I'm also wearing a black cardigan which really does flap about like the proverbial pastry.  It's one of those ones with pointy bits, like a handkerchief hem on a dress.  Is it called ballerina style?  I have no idea.  But if you are wearing one, it's probably a good idea to stay away from working machinery.  I believe it's M&S seconds, bought from the New Life Charity Warehouse in Cannock.
Posted by Catherine Fox at 02:03