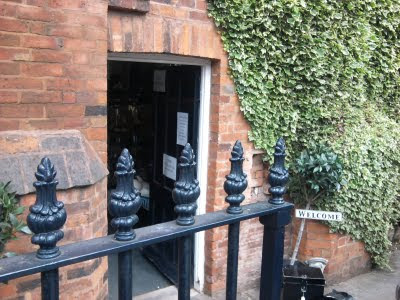 I've been running past this antique centre for weeks, ever since the Council closed the route past Minster Pool, while its banks are being landscaped. Each time I run past I think, I must pop in some time. So last Saturday morning I did.
You might think that's rather a feeble excuse for a 'New Thing'. If so, you are in good company. The canon precentor of Lichfield cathedral says I might as well scratch my arse in Tesco and think, ooh, I've never done that before! That can be my new thing for the week! I explained that he was mistaken. The rules say I can't simply notice something I have just done for the first time and retrospectively nominate it. I must choose in advance. It's my blog, I make the rules. So ner. If he continues to argue, I will be forced to deploy my deadly linguistic weapon , which is to shout 'Paninis, paninis, paninis.' He will then rant about panini being a plural, and I will no longer have to come up with feeble reasons for my feeble new thing.
I was busy this week, all right?
The top photo shows the entrance to the centre. It used to be a school. Inside I had flashbacks to the tiny village school I attended at the age of nearly 5, before it closed and we all went to the spanking (apt adjective for those benighted days) new County Primary. I could practically taste the chunks of beetroot and raw onion we had in our salad. That's false memory syndrome for you. I always dropped mine on the floor. School dinners were delivered in big buckets half way through the morning. Back in the days of school milk.
Anyway, inside was strangely reminiscent of the Museum of Childhood. Lots of brightly lit glass cases full of things that burst into your awareness with a whoosh of nostalgia. Biscuit tins. Tiny Whimsy animals. Hairbrush and mirror sets with embroidered backs. My quest was for a suitable wedding present for the cathedral organist and his lovely bride, who were getting married later that day. I also bought a 1965 Newcastle United football programme for the chancellor.
Yes, I like this place. Can't think how I've managed to live here nearly 5 years without going in for a snoop. And I don't believe I scratched my arse in there once, so I have something saved up for a dull week later in the year. 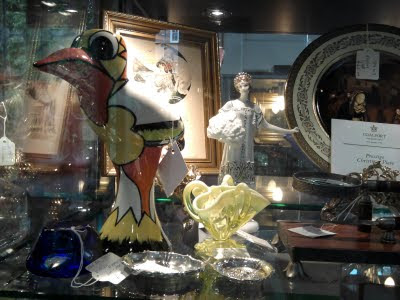 Once in a while it is good for us to attempt something we are utterly useless at. To embrace the role of hapless novice. This is especially good for the kind of person who likes to feel competent and who devotes a good deal of their time and energy to avoiding making mistakes. Or avoiding being seen to make a mistake. In private I am quite happy to cock up a crossword, for example. If there's a chance someone will see my efforts, however, I will fill in any gaps with made-up words, so that it looks as if I've completed it. (This scandalises my father-in-law. But he uses an electronic clue-solver, so we may safely disregard his opinion here.)
Anyway, back to adopting the role of novice. This is certainly what I did last Tuesday night when I went along to my first karate kata class. For those not in the know, a kata is a set series of choreographed moves, performed to teach/demonstrate certain aspects of a martial art. It is short for katastrophic balls-up of elementary technique. Here's what we did:

Karateka will immediately recognise this as pinan nidan. According to our sensei (Japanese for 'person at the front shouting'), most people master about half of pinan nidan by the end of their first hour long session. I warned him I am am hopeless at this kind of thing. He reassured me it would be all right. I think even he was taken aback when the hour was over and I had only managed to get my head round move 1, (essentially, taking a sidestep and raising your arm, see diagram). Naturally, I could remember odd snatches of later parts of the kata, but not in the right order. Or with the correct limbs, or facing in the proper direction. It's the same when I stop and ask people for directions. Remembering the last three instructions is no use when you turn left instead of right at the beginning.
Still, I know from judo that if you repeat something enough times, it will eventually enter the muscle memory. By 'enough times', I think we are talking something in the region of 500 hours. Maybe I'll write a book about my quest to get a karate black belt before I'm 90.
Posted by Catherine Fox at 08:58 6 comments: 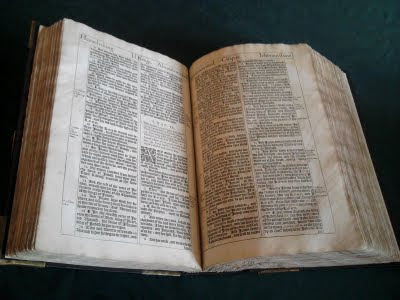 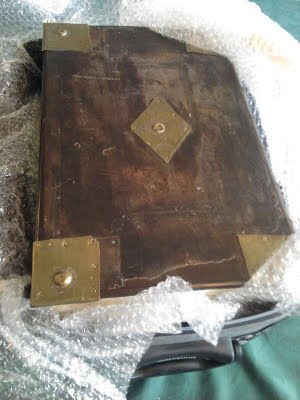 Last Wednesday I accompanied the canon chancellor of Lichfield cathedral to London to visit Quaritch, the antiquarian bookdealer. In our care were two rare bibles from the cathedral library. For insurance purposes, there had to be two people to escort the Judas Bible (bottom pic) and the recently acquired Bishops Bible (top). I like to think that I was hired in my capacity as fearsome bodyguard and skilled martial artist. But much more likely I was asked because of my standard fee of nothing at all when it comes to obliging the chancellor. Well, apart from help with my tax return and putting oil in the car, and other tasks I can't seem to get my head round.
As it happened, my judo black belt was not required. We got the bookdealer's unmolested. Possibly we looked like tourists with our little wheelie suitcases as we headed up Oxford Street and across Grosvenor Square. For those of you who are interested in such things, the Judas Bible, when cradled in bubble wrap and resting on a bed of polystyrene packaging chips, fits perfectly into a suitcase of regulation hand-luggage size for Ryan air. The Bishops Bible is slightly smaller.
The Judas Bible will be lent to another cathedral for an exhibition later in the year. Hence the need for a proper evaluation for insurance purposes. The chancellor was not at all nervous about wheeling thousands of pounds worth of Bible through London's busiest shopping street. Possibly because he frequently has to carry Lichfield cathedral's Chad Gospel (OLDER THAN THE BOOK OF KELLS) in solemn procession on high days and holidays. I once commented that he always smiled as he did this. 'Yes. It's my "I'm carrying 53 million pounds worth of book" smile,' he replied.
Posted by Catherine Fox at 07:28 3 comments: 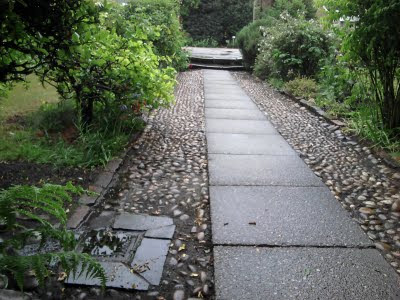 Now then. A confession. I haven't actually done this New Thing yet. As you can see from the pic of our garden path (note small puddle in bottom left corner), the day set aside for my first solo brush with a car wash turned out to be the first day of rain in weeks. It seemed pointless to get the car nice and shiny only to have it ruined on the drive home.
So what I've done is to postpone last week's new thing until next week. Don't worry, this is allowed here in Cathedral Close. We call it transferring. It goes on all the time. This week, for example, saw George, Martyr, Patron of England celebrated on 2nd May, transferred from Holy Saturday. We then had Mark the Evangelist on May 3rd, transferred from Easter Monday, followed the next day by by Philip and James, Apostles, transferred from Low Sunday. The late date of Easter has turned this into the transfer season. If tranferring things is OK with the precentor, it's OK with me.
You may be a bit surprised that I've nominated something so mundane as my new thing. But oddly enough, it isn't mundane to me. It's right in that zone of simple tasks I find oddly daunting. In that category fall such things as filling in forms, traveling, phoning people I don't know, and asking for directions. This shames me a bit. I'm supposed to be a grown-up, after all. I can't locate the exact cause of the problem. No, that's a lie--I can. It's my tendency to catastrophise. Never ask a writer 'What's the worst that can happen?'
So when it comes to car washes, the worst that can happen--as anyone who's watched James Bond knows--is that half way through the cycle, Grace Jones gets into the back seat and kills you. Alternatively--as any toddler knows--the whirly blue brushes go rogue and crush the car flat as a postage stamp as you scream and pound helplessly on the suddenly unopenable window.
Obviously, I know neither of these things is likely to happen. (Although it's not entirely implausible that I might one day have Grace Jones in my car. A Grace Jones, anyway. That's my big sister's name these days. She is, however, unlikely to kill me. Mild exasperation is more her style.) No, the thing I really fear is making a fool of myself. Bungling about, stalling, with a queue of impatient drivers behind me waiting to use the car wash. Leaning on their horns, pounding their steering wheels. 'Come on love! Not exactly rocket science, is it?'
For some reason I seldom ask myself 'What's the best that can happen?' That I sail through the car wash with flying colours, and am presented with a car wash diploma. By George Clooney. Who adds in passing how lovely I'm looking. And that this diploma qualifies me to win the Booker Prize. And has happily brought about World Peace (in case I'm coming across as a bit shallow).
I'll let you know which of these scenarios turned out to be the most accurate.
Posted by Catherine Fox at 04:50 7 comments: