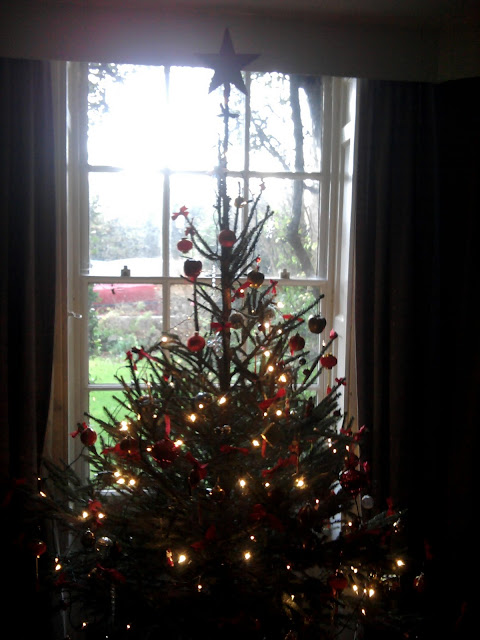 Well, fancy getting to the age of 50 without ever buying a Christmas tree.  I mention my age quite unashamedly, in an attempt to lure you into saying 'You never are!'  That is the correct liturgical response whenever a lady mentions how old she is.  Be careful not to overdo it though chaps, or it becomes patronising.   I was hailed thus by a youth selling programmes at the theatre last night: 'Evening, gorgeous!'.  Later my older son suggested I respond: 'Evening, smarmy!'  But the moment was long gone.

The buying of Christmas trees is an area of modern life that is still subject to the unwritten rules of patriarchy.  Like the vulcanising of meat on a barbecue, it is something men do.  My father always bought our tree while I was growing up, and so, I realise, the chancellor is the chief tree-buyer in our household.  I go merely go along in an advisory position, and tell him which tree to buy.

This year, in keeping with my New Year's resolution, I decided to go it alone.  I am 50 years old (Why, thank you, you old flatterer!) and I can surely buy my own Christmas tree without male help.  But then at the last minute I decided to take my older son along to handle the manual labour side of things.  He's good company and I've missed him while he's been up at university.  We drove to the cheap Christmas tree outlet at a Farm Shop in Walsall.  This is only cheap if you forget to factor in the petrol.  And if--here's the thing--they haven't sold out of trees.  Apparently there was a rush.  Loads of people have all suddenly decided to buy a tree in mid-December to decorate their house.  It's some sort of festive custom in the UK, it emerges.

So back to Lichfield and off to the Plant Plot.  'We'll just buy one and pretend we don't care how much it costs,' I said.  But flip! (as we say when the chancellor is listening)  SEVENTY QUID?!  'I'll go and do a strip tease for the woman, and you sneak out with the tree,' suggested my son.  'That way we'll probably make money, because she'll pay me.'  But then we noticed that it was only these new-fangled non-shedding blue spruces that are so expensive.  Your old-fashioned traditional Norway spruces were less than half the price.  So that's what we got.  £24 well spent.  And so long as nobody touches it or sneezes within three yards of it, the needles will probably stay attached till the twelfth day of Christmas.  And then it's next year's kindling.