What to Wear at Pentecost

Pentecost, or Whit Sunday as we used to call it in the golden days of my childhood, is a fine day to wear red.  Vestments are red on Pentecost Sunday, which I like to think is symbolises the pentecostal fire falling from heaven with the sound of a rushing mighty wind in the second chapter of Acts.  No doubt some liturgical pedant will point out that we wear red on all manner of other high days and holidays as well.  We will leave such people to their amusements.

There's no obligation for the ordinary pew-fillers to wear red, orange or pink, but some of us like to get into the spirit of the thing.  It's a kind of sartorial priesthood of all believers.  While I draw the line at turning up in a chasuble, I took the opportunity to wear my most fiery-coloured shirt.  Here it is: 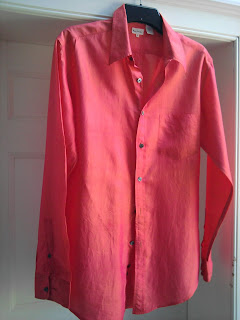 You can't really see its full glory, but it's shot silk, and changes colour as it moves.  I wore it with white linen trousers (white for 'Whit').  This shirt is actually the only designer garment I own that was not from a charity shop.  It's by Paul Smith, and I suspect it would now count as vintage.  I was given it in 1997 on the publication of my second novel, by my then editor, Kate Jones.  Those of you who knew Kate, who died in 2008, will know how tickled she'd be to think that I'm still wearing this shirt.  I haven't quite got out of the habit of thinking I must tell Kate that.  I would tell her, for example, that the shirt is now beginning to fall apart, but that I've cunningly mended it with iron-on Vilene penned in with an orange felt-tip.  Except that to tell Kate this kind of thing was to prompt yet another sly burst of generosity.

Damn, I still miss her.  She was an atheist, but she listened with great good humour to my accounts of the life of faith.  It was Kate who spotted and bought my first novel, a sprawling 600 page MS which wrestled with the mess of belief and doubt.  Sometimes my faith is pretty minimalist thing, resting on not much more that a persistent sense of presence, patchy, but not often completely absent, and never for long.  I sometimes think Kate was right.  But I hope she wasn't.  I hope death was not the end of that long witty, compassionate,  just and creative conversation I hadn't finished with back in 2008.
Posted by Catherine Fox at 09:54