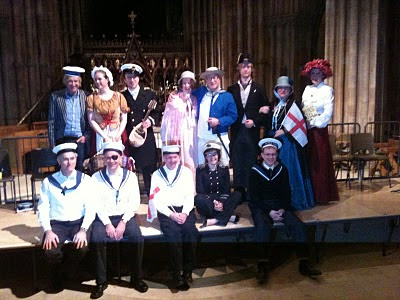 Last Saturday night I, along with my fellow Ladies Who Lark, sang in a scratch performance of HMS Pinafore. The men's and women's choruses rehearsed in the afternoon, under the baton of Cathy Lamb (sitting crossed legged on front row in the photo). At one point she said 'Just hurl yourself at any note and it will be marvelous!' The entrance requirement for Ladies Who Lark is not intimidatingly high, as I may have mentioned in an earlier blog. But I like to feel we have made great strides. Surely this is the case. Why, at one point during our Monday evening session Cathy was so struck by our musicality that she said, 'You actually sounded like a real choir then!'
The evening was hugely exciting, and qualifies as a genuine first for me. I've always wanted to sing some G&S. As a girl in the 70s one of the highlights of the year was going to the Vale Gilbert and Sullivan Society performance in the Victoria Hall, Tring. The thrill of this occasion for a child growing up in rural Buckinghamshire without a TV cannot be described. To get an equivalent buzz at my age last Saturday's Pinafore would probably have had to be performed off bungee ropes with the entire cast of True Blood. In the nude.
Still, even without naked vampires, it was as I said, hugely exciting. The soloists' parts were taken by members of Lichfield Cathedral Choir, Lichfield Cathedral Chamber Choir and the congregation. Our cathedral organist, Martyn Rawles, (front row, far right), accompanied on the piano. The hoi poloi got to sing, or occasionally mime, as sisters, cousins and aunts, or jolly jack tars. The event was well-attended which is encouraging, as it was a fundraiser for the Choral Foundation. Singers were charged (or possibly fined) £10. But hey, we got to dress up. I love dressing up. I sometimes almost wish I were ordained. That's me in the photo, extreme right, with an exploding red cabbage on my head. I was allowed to join the photo call on the grounds that I'd written the the narrator's part, which was read by our local ham. Sorry, that should have read, our local MP, Michael Fabricant. I would like to take this opportunity to say that the rude bits were all ad libbed.
Posted by Catherine Fox at 13:05