WEEK 49--A Morning at KwikFit

You will be pleased to see that I have finally caught up with the calendar and we are now in the correct week of the year, Week 49.  This was achieved by quantitative easing.  Quantitative easing is when people high up in finance do something mysterious and then say, There, it's all right now.  I've simply applied the same process to my blog.  There.  It's all right now.

My New Thing for Week 49 was to spend Saturday morning at KwikFit, Lichfield.  The previous day while on the M6 (everybody's favourite motorway!) our car began juddering as though we were driving over non-stop rumble strips.  It was worse when accelerating or going up hill.  A scary little icon began flashing on the dashboard, one we'd never seen before.  I screamed and grabbed the user manual.  It generally says 'If a scary icon appears, DO NOT ATTEMPT TO DRIVE YOUR CAR OR YOU WILL SURELY DIE! Make your way slowly to your nearest specialist dealer who will sell you an engine part for £900 plus labour.'  The icon looked a bit like a cam-corder, but according to the book, it was something in the exhaust system.

So at 8.30 the next morning--having phoned and booked a slot, please note--I rumbled off to KwikFit.  At the last moment I grabbed a paperback thriller, and I'm very glad I did.  Three hours is a long time to sit getting cold and waiting for someone to sort out your car.  It certainly gave me time to contemplate the word 'kwik' from all possible angles.  Below is my view: 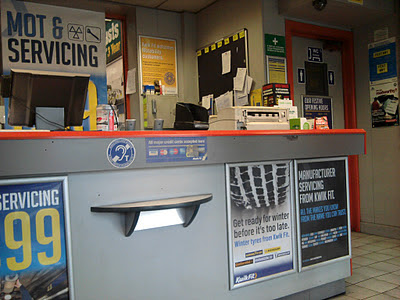 I'm afraid to say that I'm a complete girl when it comes to cars.  This is why I knew I had to embrace this challenge as a New Thing, rather then let the chancellor sort it out.  The KwikFit fitters (better than whom you cannot, of course, get) asked me a whole bunch of technical car-related questions, like, 'What's your registration number?' and 'Is it the two 2 litre?  Is it turbo?  Is it petrol or diesel?'

I floundered through gamely, but then they began to outline the possible reasons for the juddering.  Here's what I heard: 'Well, it could either be the tssss-shshshsh-chchchhh-crrr, or possibly the crr-tsss-chchchc-crrr-ssssshhh, or maybe the spark plugs.'  White noise--exactly the same as when my accountant is going through my tax return with me.  Obviously, the car then needed chhhchh-shhshhh.  Diagnostics, I believe that translates as.  Diagnostics, as you've probably guessed, is where they put an elf up the tailpipe so that he can scamper through the exhaust system with his tiny silver hammer, testing everything with a Ting! Ting! Ting! and finding out what the problem is.  Obviously it's expensive, because you've got to pay the supernatural creature minimum wage, and that's not cheap, thanks to the EU.

Well, it turned out it was one of the coil packs.  I was shown the culprit.  I frowned at it in what I hoped was  a knowledgeable-looking way.  Bad coil pack!  All that remained was for them to ring their parts supplier for a new one, and all would be well.  Shouldn't take long, they're only coming from Tamworth.

Well, as I said, I'm glad I picked up a book on the way out.  (Thank you, Joseph Finder, for your company in my trial.)  In KwikFit's defence I will say that when the part finally came, they fitted it very kwikly indeed.  I got the impression they couldn't quite believe I hadn't thrown a monumental tantrum.  Perhaps this is why they rewarded me with the promise of a £20  MOT.  That's a whole £10 off.  To be honest, I was rather more interested in another offer I saw advertised on a poster on the wall: 'A VIR FOR EVERY CAR'.  My Latin is pretty rusty, but I think that means 'A man for every car.'  I choose a fireman.