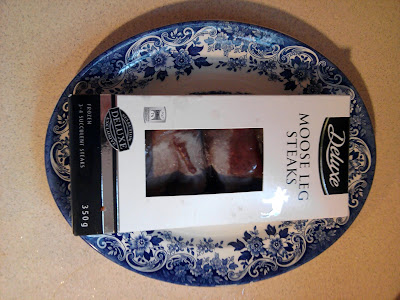 The eagle-eyed amongst you will have realised that I am not going to manage 52 New Things in 2011.  Or not unless I cram rather a lot of novelty into the next four weeks.  Cooking moose steaks was really last week's New Thing.  We had them for lunch on Advent Sunday.  Please notice that these were Deluxe moose steaks, because we all hate those crappy non-deluxe ones.  I bought them at Lidl for £9.99.  A bit steep, but hey, it was a New Thing.  Cheaper than sky-diving.

I did a bit of culinary research to discover the traditional way with moose.  Perhaps marinated slowly in a fragrant combination of pine bark and Norwegian toadstools, then served up on a bed of sphagnum moss?  But as far as I could make out, most recipes treated moose pretty much as beef.  So that is what I did.  There was a nod in the direction of game in my made-up casserole, in the form of juniper berries.  Nothing says 'game' in a casserole quite like juniper berries.  Apart from lead shot, of course.

Well, was it worth it?  Was it delicious?  Will I be serving up my Advent moose casserole for years to come?  Nah.  The verdict round the table was that it was nice.  'Nice' is not a rave enough review to tempt me into a repeat performance.  I need an 'astonishing', or even the silence of cross-eyed drooling bliss.  Moose is basically like a slightly game-y beef.  Unless I was cooking it all wrong, that is.  If you know better, leave a comment.
Posted by Catherine Fox at 12:29