WEEK 33--Guest at a Civil Partnership 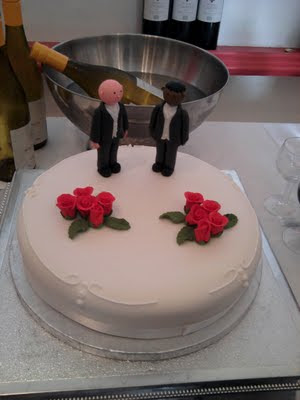 I've lost count of how many weddings I've been to in my life.  Dozens and dozens, almost all in churches of one kind or another.  I've been to a handful of Registry Office weddings, and more recently, non-religious ceremonies at other venues.  This was the first Civil Partnership ceremony I'd been to, however.

Now then, Civil Partnerships are not church weddings.  This is a minefield.  I myself was caught up in a real dilemma here.  After much deliberation and heart-searching, I decided the occasion warranted my best millinery efforts.  So I bought a fabulous hat, wide as a cartwheel,  to go with my charity shop dress.  Then I was told by the best woman that there was a 'no hats' dress code!  Flip, I thought.  (Well, the first letter was the same.)  I immediately sought a special dispensation from one of the grooms.  This was granted, and all was well.  But you see what I mean?  It's a total minefield.

Having been on a lengthy journey from my Evangelical roots, I was able to enjoy the ceremony in an uncomplicated way.  (Apart from the logistics of wearing a cartwheel in a confined space, which admittedly was complicated.)  I'm aware that not everyone is at ease with Civil Partnerships.  A13 year old I know, for example, told me that she found the idea 'Rather unnerving.'  So do many in the Church.  The C of E has not yet found a way to bless same sex unions officially .  Unless you happen to be in the Diocese of Southwark, where I understand unnerving things do go now and then, and you occasionally get the feeling you're not in Kansas any more.

Still, for the friends gathered on Saturday to wish the couple well, it was a supremely happy day.  It always strikes me as a bit odd when people say that Civil Partnerships 'undermine the institution of marriage'.  You could argue that two people publicly committing to a lifetime of faithful love kind of enhances the whole idea.  I'd nominate cheating on your spouse as a more pernicious undermining influence, but there you go.

For those of you wrestling with similar issues to my own, let me just say this: however extravagant your hat, in all probability you will still be eclipsed by the outrageousness of the grooms' gay friends.