WEEK 12--A Visit to The Museum of Childhood 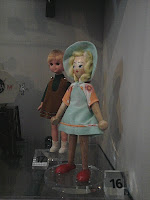 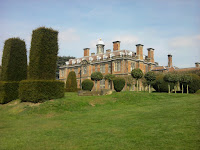 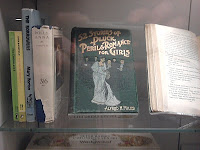 About 10 years ago I tried to visit The Museum of Childhood at Sudbury, Derbyshire. It was closed. This morning I finally achieved my ambition.
Sudbury Hall is owned by the National Trust and, as you can see in the pic, is the kind of place where you expect to encounter Mr Darcy plunging into a pool, or Mr Collins scuttling from his vicarage to dine with Lady Catherine. But first things first. The chancellor and I went straight to the tea room, where we had coffee. He had a slice of fruit cake and I defiantly ate a low fat yoghurt (more on the rigors of Dukan in a later blog). Afterwards we visited the museum.
A lot of time is inevitably spent shouting 'I had that exact same Cluedo set!' or sighing over dolly's tea services. I was particularly thrilled to see one of those cheap wooden dolls from Poland (above) that were common in the 60s. They were the kind of thing my sisters and I used to buy when fond relatives gave us a ten shilling note each. They came in a plastic bag and you couldn't really play with them, because the clothes were glued on and their big red shoes were just paint. Before long the arms broke from their sockets. Most exciting of all, their hair was made of cellulose! That's right: highly inflammable! At any moment the doll's head might burst into flames! This never happened.
There were a few surprising omissions. I didn't see Barbie or Action Man. Maybe this was a policy decision? More astonishing was the absence of Look & Learn from the 1970s bedroom. What, no Trigan Empire? No Wild Cat Wayne? The bookshelf (see pic) was a checklist of the girlhood classics: Polly Anna, Five Children and It, The Borrowers, The Box of Delights. I don't recall reading 52 Stories of Pluck, Peril and Romance for Girls by Alfred H Miles, mind you, but I will if someone gives me a copy. I read and greatly enjoyed A Toast Fag and Other Stories a few years back. My sons still like to quote bits of it. 'I'll settle your hash any day, you moon-faced cuckoo!'
But the museum is also very good on how recent the concept of a carefree childhood is. The life of the child labourer in the Industrial Revolution was vividly communicated. In one room there was a fireplace that children were invited to climb up inside, crawl along a tunnel and emerge in the fireplace at the opposite side of the room. (An assistant was on duty to say 'Not you, fatty,' to any adults expressing an interest.) There were also displays highlighting the lot of child labourers in other parts of the globe today; as well as the hidden burden shouldered by countless child carers in our own society.
After we'd been round the museum we took a stroll down to the ornamental lake. Colin Firth was nowhere to be seen, but I did hear my first chiff-chaff of the year. An inspiring outing. As you can see (below) I got the urge to create my own little museum of childhood in my study. Remember those Eastern Bloc teddies? Loop coming out of their head, coats as fuzzy as bus seats, dangerous glass eyes a baby could swallow and choke on? Ah, they don't make 'em like that any more. 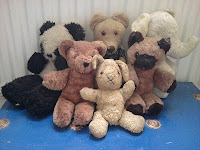