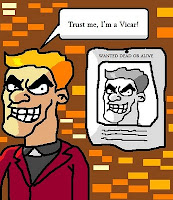 This cartoon is by my son. I don't know where he gets his ideas from. It has nothing to do with this post, but it makes a change from last week's random meteriological puzzle. Or indeed, gynaecological puzzle, which is what my spell check is suggesting.
Anyway. I was reading recently that men aren’t from Mars at all, neither are women from Venus. The physiological differences between the male and female brain at birth are tiny. It’s nurture, not nature which dictates that women back into gateposts and men don’t understand cushions. Cushions, the whole concept of cushions, what they are for, why women clog up sofas with the things, so that you have to fling about fifteen aside before you can locate enough sofa to sit on.
Whether it's down to nature or nurture, there are one or two of the old stereotypes I conform to. The gatepost thing, the cushion thing. The whole lack of spatial awareness thing. The other day our newly-appointed hermaphrodite Director of Music, which is to say, a husband-and-wife team Director of Music, showed me round the directorial house. I used to get lost here in the chancellery, but the chancellery is a doddle in comparison. At one point in my tour—which led up and down narrow flights of stairs to bits of the puzzle which never joined up—said ‘I have no idea where I am. I have zero spatial awareness.’
This led to a fascinating discussion about how brains work. Well, it led to me holding forth on my specialist subject area, me, and how my brian works. (It partly works by being endlessly amused by typos, such as that one. I don’t in fact have a Brian at the moment, nor am I recruiting.) My brain, I told the directorship, (who were too polite to yawn in my face, though they did turn the TV on and watch a very tedious programme about Anglo-Saxon artefacts) my brain does not do frameworks. It can only arrive at over-all schemes by the organic accumulation of details. I cannot read a book and tell you what it’s about, what the argument is. Though I can usually remember some interesting and significant facts. Like, there’s a cat on the cover.
The male bit of the Director asked how I plot my novels if I can’t do frameworks. ‘They grow organically from one central scene, or situation,’ I told him. ‘And then it’s rather like planning a journey. You know where you are setting out from and where you hope to arrive, but you don’t know exactly what’s going to happen along the way.’ ‘They are using 17th century music to illustrate Norman architecture,’ he replied, as the TV camera panned down the nave of Durham cathedral.
I didn’t get round to explaining that finishing a novel is like trying to choreograph tortoises. Or like cooking a banquet. It’s all in the timing. Everything has to be ready at the same moment. You don’t want to end up with raw chicken and soggy veg. This rambling is by way of an explanation for my lack of posts this week. I’m busy with the tortoises.
Posted by Catherine Fox at 14:33

Email ThisBlogThis!Share to TwitterShare to FacebookShare to Pinterest
Labels: how to finish a novel, Lichfield Cathedral Director of Music