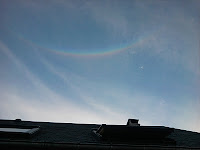 This is a photo of an upside down rainbow I saw on holiday in Brittany. It has nothing to do with this post, apart from it being loosely speaking baffling. If you can explain it, leave a comment.
My real subject of bafflement is hymns. I grew up in a household with no TV. It was also a chapel-going household. One of the legacies of this is that I know hymns the way most normal people know pop music. Just as people mishear the lyrics of songs played on the radio (cf Hot Gossip’s famous ‘I lost my heart to a draught excluder’) so my sisters and I misunderstood the words of hymns. I remember being puzzled for years by the Advent hymn ‘On Jordan’s banks the Baptist’s cry’. Being a Baptist myself, I couldn’t help picturing the entire congregation lined up on the banks of the Jordan sobbing our hearts out. Why? Why just the Baptists? Because the Anglicans hadn’t repented, clearly.
One Christmas my youngest sister was overheard singing ‘Hairy Demption’s happy dawn’ instead of ‘Hail, Redemption’s happy dawn’. My father asked her what she thought a hairy demption was. She had no idea. But frankly, so much of your childhood is full of bizarre facts told you by adults, why would a hairy demption be any less plausible than the earth spinning like a roundabout, or chewing gum wrapping itself round your lungs if you swallow it? We were also baffled by the line in ‘God rest ye merry gentlemen’ which seemed to refer to ‘the witch his mother Mary’. But the best mishearing of all was a little boy in our Sunday School who thought the old song ‘I will make you fishers of men’ was ‘I will make you vicious old men’.
Of course, now I am an adult I have put away childish things. I no longer misunderstand hymns. Well, only on purpose. I’m always amused by the line in the hymn ‘And now, O Father, mindful of the love’, which talks about ‘this food’ (the Blessed Sacrament) ‘so awful and so sweet.’ Like baklava, maybe. Or indeed fudge, such as I have on my desk now—Morrison’s The Best All Butter Fudge, ‘made to an authentic recipe for a rich, melt in the mouth flavour.’ They mean a rich melt in the mouth texture, really, don’t they? There is no such taste as ‘melt-in-the-mouth.’ And in any case, if it didn’t melt in the mouth, it wouldn’t be fudge, it would be chewing gum, or pumice stone. I mention that not at random, but because my youngest sister (she of the hairy demptions) once did attempt to eat a pumice stone. We found the tooth marks.
I have strayed rather from my subject. Anglican hymns are not the same as Baptist hymns, by the way. Baptists do not sing saccharine hymns about the Blessed Sacrament, such as the cathedral favourite ‘Sweet sacrament divine’. They reserve such sentiments for the Lord Jesus. And they certainly don’t sing hymns to the Virgin Mary. In fact, most Evangelicals balk at this, so a merry time was had by them if they strayed into any of the cathedrals of our land last Sunday, as it was the Feast of the (Massive) Assumption. I had my internal Geiger counter switched on in all the hymns, scanning for Papism. Don’t get wrong, some of my best friends are Papists. And some of their best friends are narrow minded Evangelical bigots, obviously. Like me.
Posted by Catherine Fox at 07:24

Email ThisBlogThis!Share to TwitterShare to FacebookShare to Pinterest
Labels: Feast of the Assumption, hymns