Last night I was at the launch of the amazing Manchester Children's Book Festival 2015 (more info here: http://www.mcbf.org.uk/?from=mmu-homepage-banner) The festival was declared open by the Creative Director of the Manchester Writing School at MMU, Dame Carol Ann Duffy. 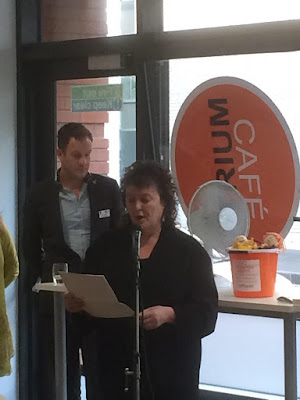 It was one of those moments when I was overcome by astonished gratitude that I get paid to do what I'd probably do anyway, as a hobby; plus I get to do it in the same place as so many stellar colleagues.  Admittedly, this feeling alternates with a sense of panic, when I look around at people my age and realise Oh no, we are the ones in charge now!

Once we were officially declared open, it was wine and canapés and mingling.  Or networking, which is like mingling, only you can put it on your CV.  I was busy networking with my colleague Michael Symmons Roberts in a high-powered way, when our group was approached by a magician. 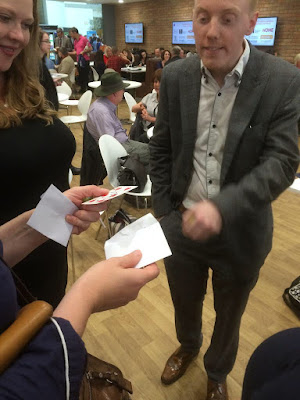 Well, we are a bunch of trained academics.  Scepticism and careful interrogation in the pursuit of academic rigour is our motto at all times.  We watched closely.  We knew there was a trick.  Sleights of hand.  Distractions.  We'd spot them.

The magician proceeded to astound us with impossible feats of close-up magic.  A deck of cards that turned into a perspex block in my hand.  A signed two of hearts that appeared in a sealed envelope. No!  No!  Impossible!  If you have ever seen this type of magic performed, you will understand when I say that we simply laughed in delight and disbelief.  Our considered academic conclusion was that he was using genuine magic.  There was no other explanation.  Furthermore, he would probably disappear through a portal into another dimension at the end of the evening.

'Now that's what fiction does,' I said to Michael Symmons Roberts.  'You know it's not real, and yet you believe it anyway.'

And he, being a poet, replied: 'Well, I'd rather watch magic than read a novel.'  I can only assume he's suffering from a fiction overdose after adapting so much Trollope for Radio 4 (http://www.bbc.co.uk/programmes/b03sfyzp)

For more about The Manchester Writing School and our MAs in Creative Writing and English Studies, and a variety of CPDs, look here: http://www.manchesterwritingschool.co.uk/
Posted by Catherine Fox at 09:04