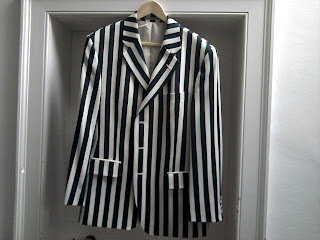 How about that for a fab stripy blazer?  I borrowed it from one of the alto lay clerks.  I will be wearing it in the cathedral tonight when I am taking on the role of narrator in our 'Come and Sing Iolanthe' evening.  Normally the narrator's part is played by Michael Fabricant, our MP, but he is unable to be with us.  I am his stunt double for the night, and that of course, requires me to dress the part.  Hence the stripy blazer.  I shall team this with wall-to-wall filthy innuendoes.  People will hardly know the difference.  I did contemplate going blonde or sporting a Marilyn Monroe wig, but in the end I decided that would simply look ridiculous.

Please don't run away with the impression that all our alto lay clerks prance about the Close 24/7 in stripy blazers.  I believe this one came from the gentleman's dressing-up box.  He told me he bought it when he took part in a Murder Mystery party while still at school.  Quite recently, then.  (This is the fellow who so crassly pointed out that he is the same age as my oldest jumper.)

I think the world is divided into two camps on the issue of dressing-up.  When that fancy dress party invitation arrives, half will groan, the other half will already be mentally ransacking the dressing-up box.  I belong to the latter group.  I quite literally have a dressing-up box.  It's contained in the trunk I went up to Durham with as a callow 18 year old--a treasure trove of fireman's helmets, wigs, sparkly frocks, hats, mortar boards, velvet jackets, army fatigues, gloves, frills and furbelows.

Dressing up is in my blood, and not being ordained, I have so few outlets for expressing it.  My sisters and I always won first prize in the local village fêtes.  Fancy dress costumes weren't something we hired.  No, they were cobbled together out of curtains and cardboard; adapted from charity shop and jumble sale purchases.  I inherited the fancy dress eye from my mother.  You need a cheap but effective costume?  Come to me and I'll sort you one out.  I was always insanely competitive on World Book Day.  But my sons went to a C of E Junior School, and we all know what that means, don't we?  Yeah, exactly--first prize goes to the poor kid whose parents are splitting up, not to the BEST COSTUME.  Which invariably was being worn by MY SON.  I spent hours scouring the charity shops to find those doe-skin britches that fit with never a wrinkle for his Highway Man outfit!  My mother made those flintlock pistols out of papier mache!  And they gave the prize to a kid in a factory made Batman outfit.  HELLO?

Obviously, I'm over it now.
Posted by Catherine Fox at 05:48