Today is the sabbath, a sort of Anglican via media between slobbing about clothes and party wear.  I am wearing brown treggings.  Yes, brown.  These were absolutely my last purchase of 2011, bought on the internet on New Years eve from M&S with some Christmas vouchers.  We tend to get a range of vouchers each year, and there is an understanding that any M&S vouchers are rightfully mine.  It is my own understanding, but I am happy to impose it on everyone else.  Occasionally there has to be a bit of horse trading, in which I hand over book tokens and the like.

So: M&S brown treggings, £19.95.  Size 10.  In old money, size 14.  They are also long, because we must be constantly vigilant now we are in the 50-70 age bracket, that we are not wearing our trousers 2in too short.  Why this happens to people, I don't know.  You'd think with loss of bone density all our trouser cuffs would start trailing in the dirt, but this is manifestly not the case.

I am also wearing this top (which I can't be bothered to try and describe): 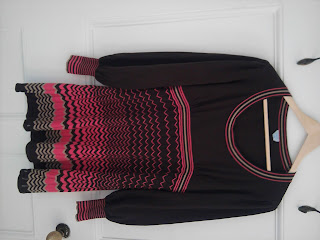 I decided against posting pictures of me in my daily outfit.  The thought of 366 dodgy photos appearing any time anyone searched Catherine Fox on Google images was too ghastly to contemplate--even if I am the only person ever to conduct such a search.  Instead I pretended I was selling the garment on eBay and took a rather bad photo of it hanging on the back of the bedroom door.  It's Oasis, size 12 and it came from one of the charity shops of the West Midlands region.

I wore it with my filthy pale tan boots, which I may re-brand as my mid tan boots because that sounds nicer.  And because I was venturing out, I wore a coat: dark brown fake suede, but with genuine shaggy crinkly fur (which has a proper name that is currently eluding me) collar and cuffs.  I bought this coat many years ago when I was going up to London to impress publishers into buying my judo book proposal.  It was from TKMaxx, and I don't know how much it cost.  Outfits bought to impress publishers belong in a separate moral universe where cost is no object (provided the total is less than the advance you subsequently receive).
Posted by Catherine Fox at 05:24