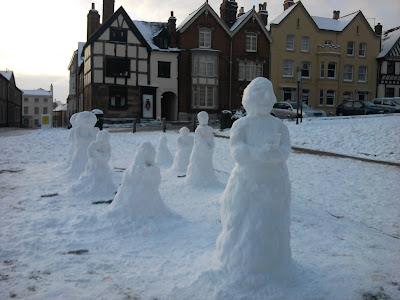 Happy New Year. This is a picture dating from 2010, in the December of Low Temparatures, back when we froze in our listed buildings because we had no secondary glazing and all the radiators were positioned under windows and behind curtains so that the flesh could be suitably mortified. The old Northumbrian saints used to stand in the North Sea. We can be mortified by a trip to the loo at 3am.
The photo features the Snow Choir. The precentor told me he preferred it to the real choir. ‘Cheaper, and fewer wrong notes.’ He was probably feeling grumpy at the time. Because of the extreme cold. But 2011 will be different. We will all be warm and cheerful. That shall be the Close Resolution. My own personal New Year resolution is a revamp of an old one, in which I pledge myself to do something I have never tried before. I will do one new thing a week throughout 2011. This will counter the creeping middle-agedness I find myself battling. This is caused by being middle aged. If you are not middle aged at 49, then frankly, I don’t know how long you are planning to live. The thing I am battling against is not my age, more an inflexibility of attitude. An inner resistance to trying new things on the rather paltry grounds that I have never done that before and I’m nervous, or would feel silly. Which is ludicrous. You cannot play safe and do something new that you have done before, can you?
Some of my new things will be small, some large. I haven’t decided what this week’s challenge will be. I may take up karate. I can strangle someone 15 different ways, but it would be nice to be able to hit people too. Properly hit. I hit like a girl. (I throw like a girl, of course. Mostly foot sweeps and leg techniques. Call round some time and I’ll demonstrate.) I will also watch more Bette Davis films. I shocked a fellow writer by my total ignorance of the plot of All About Eve. As a tribute to my mother, I may make a genuine medieval trifle. She went through a phase about 20 years ago of remarking, apparently out of the blue, that one day she would like to make a genuine medieval trifle. Some research will be needed first. It may turn out that my mother was in pursuit of an anachronism. Maybe there were no trifles before Regency days. Trifles sound Regency. 'La, Sir Peregrine! I'd be vastly obliged if you would take a dish of trifle with me.' But this is what 2011 will be all about: pushing back the boundaries. Learning new things, getting out of the rut, chasing mirages. I’ll keep you posted.
Posted by Catherine Fox at 07:31