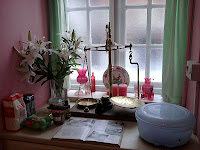 Today I plan to make my Christmas cake. Obviously, I should have made it on 21st November, as that was Stir-Up Sunday. Stir-Up Sunday is the Sunday next before Advent, when the collect (or prayer, for any ignorant Nonconformists and Atheists who have strayed here by pressing the ‘Next Blog’ button) for the week is ‘Stir up, we beseech thee, O Lord, the wills of thy faithful people; that they, plenteously bringing forth the fruit of good works, may of thee be plenteously rewarded; through Jesus Christ our Lord. Amen.’
Well, this year I missed the boat. Liturgically speaking, that’s probably seven years bad luck. But the cake should taste the same. You will see my preparations all laid out in the photo. I’ve arranged it all so beautifully I may leave it a few more days, just so that I can admire it every time I go into the kitchen to check whether the butter has reached room temperature yet. Of course it has! It’s still frozen. The cookbooks mean room temperature in a normal house. In the olden days before central heating and double glazing you hired a peasant to walk around for a couple of hours with the butter pat clamped in his armpit.
Sadly, despite the ‘rights and appurtenances’ promised Mr Chancellor when he was made Prebendary of Alrewas* at his installation at Lichfield Cathedral, provision for a butter-warmer is no longer guaranteed. And in an age where the Church Commissioners are threatening to chop up the Zurbaran paintings for kindling to heat Auckland Castle ready for the next Bishop of Durham (or whatever the fuss is all about) we can’t really complain about the lack of willing peasants here in Lichfield Cathedral Close. I can sit on my pack of Anchor myself, if push comes to shove.
That's my grandma's cake book in the picture, by the way. It has black and white photos and rather austere language. The word 'somewhat' occurs. 'Stir until somewhat mixed.' One recipe calls for 'sal volatile'. This, as you well know, is ammonium carbonate, formerly known as hartshorn, or smelling salts. Not readily come by in the bakery section in Morrisons, so I suppose you'd have to substitute Red Bull, or some other modern stimulant. Or else administer a brisk slap to your cake mixture.
*This is a bit like being made Marquis of Carabas. Sounds poncy, but means nothing.
Posted by Catherine Fox at 05:25